The idea of a flying car has been around for a long time now.  It really started with the Taylor Aerocar. 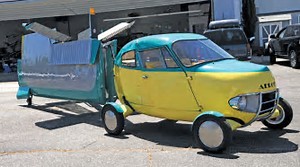 While it never was put into production the Aerocar did work although the wings and rear fuselage had to be trailered to be available when needed for flight.  Six examples of the Taylor Aerocar were built a few remain airworthy today although only one of the six is ever flown.

There have been and are many attempts at building a flying car but the disparate needs of cars and light aeroplanes mean that great compromises have to be made in their design.  And they are not cheap due to the design demands and the fact that even if successful they are not likely to sell in the numbers that cars sell.

I believe that of all the new flying car designs today the most likely to succeed is the Samson Motorworks Switchblade.

The Switchblade is a three wheel machine and that means that in Australia and many other countries it would be registered as a motorcycle and would require a motorcycle license to drive it on our roads.  As an aircraft the machine would be registered in the Experimental category and would require at least a Private Pilot License (PPL) to operate.  It will be sold as a “51% kit” which means that the owner must assemble at least 51% of the machine.  This may actually be easier than it sounds as builder assist will be available for the machine.

A two seat machine powered by a 180BHP V4 engine the Switchblade provides excellent performance both on the ground and in the air.  It is designed for comfort, safety and speed.  Its maximum speed on the ground is 160km/h and its cruising speed in the air is 250km/h.  When being driven on roads the fan that drives it in the air is uncoupled from the engine and is completely enclosed except for air intakes and exhaust.  There is no danger presented to pedestrians by the propulsion system.  The wings while on the ground are completely hidden by being retracted into the body of the machine under the cabin.  The empennage also retracts to reduce the length of the machine and render the empennage relatively harmless.

It is clear that the Switchblade has limited ground clearance but this is unlikely to represent any kind of problem because why would anyone drive such a machine over poor roads when it can be flown?  It would make no sense to do so.  I would expect most owners of the Switchblade to drive it from home to the airport, fly to their destination airport and then drive to the final destination on local roads.  It is probable that no-one would ever drive it from town to town nor would it be likely that it would be driven on any but sealed roads.